New Delhi: Social media is heated up after ‘Shaktiman’ actor Mukesh Khanna, who played Bhishma Pitamah in epic television series ‘Mahabharat’ called out The Kapil Sharma Show in his new post on Instagram and even said it is ‘vulgar’. He expressed his displeasure at the cross-dressing where men are dressed-up as women on the show to play various characters. 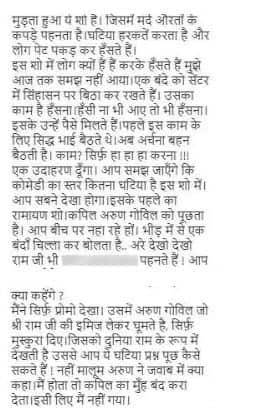 For the uninitiated, the cast of ‘Mahabharat’ was called to Kapil Sharma’s show recently in one of the special episodes in which Mukesh Khanna was not present.

Gajendra Chauhan, who went on the show along with other lead members blasted Mukesh Khanna for calling out Kapil in such a derogatory manner. In an interview with Hindustan Times.com, Gajendra aka Dharamraj Yudhishthir bashed Mukesh by saying that if he had issues with men dressing up as women on Kapil’s show, then why did he not leave ‘Mahabharat’ where Arjun was also dressed as a woman in one of the scenes?

Further, Gajendra reacted to Mukesh’s new video on Instagram where he is seen taking a dig at him. “If you see the video, he has himself said that he was not invited and that he would not go on the show even if he was invited. This is like ‘maan na maan main tera mehmaan’. When he was not invited in the first place, how would he even go? Secondly, I think he has started thinking of himself as an authority on Mahabharat. He goes around giving gyaan to everyone. In the process, he has lost his own knowledge,”  he told Hindustan Times.

Adding further, Gajendra said: He wants to comment on some popular people and bring himself in the limelight. First, he commented on Ekta Kapoor and her Mahabharat, criticising it and saying that it was badly made. Anybody has the right to make Mahabharat in their own way. No one has registered Mahabharat in his name. Then, he attacked Sonakshi Sinha, and now he has attacked Kapil Sharma. I think this is an attempt to bring himself in the limelight by attacking prominent people.

“I also want to say, films are not vulgar. Films are either good or bad, hit or flop. He was a flop actor before Mahabharat. All his films had failed, which is why he turned to TV from films. He was first cast as Dronacharya. Vijayendra Ghatge was supposed to play Bhishma Pitamah, but he was busy with Buniyad, so he had to let go of the role,” he added.

Gajendra added, “I object to his comments. Yesterday, he posted a video on his YouTube channel. I completely condemn it. He should look at himself. Those who live in glass houses should not throw stones at others. Please look at your own career and films. You were tagged as a flop actor before Mahabharat. It was Mahabharat which saved your career. I was just a newcomer. I did two films before doing the show.”