New Delhi: Popular television host and actor, Mini Mathur, who is married to filmmaker Kabir Khan lashed out at haters for trolling the latest Tanishq advertisement on inter-religion faith. She took to her Instagram story and said ‘I received this and even more love from my multi-cultural marriage’.

Take a look at her screenshots: 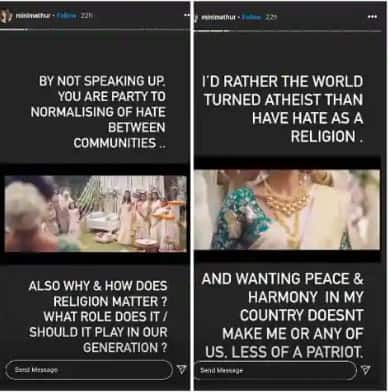 Her Instagram stories read: By not speaking up, you are party to normalising of hate between communities. Also, why and how does religion matter? What role does it/should it play in our generation? I’d rather the world turn atheist that have hate as religion. And wanting peace and harmony in our country does not make me or any of us, less of a patriot.

Jewellery brand Tanishq had to pull down its controversial advertisement which shows a Muslim family celebrating their Hindu daughter-in-law’s baby shower.

Tanishq released an official statement reading: The idea behind the Ekavatam campaign is to celebrate the coming together of people from different walks of life, local communities and families during these challenging times and celebrate the beauty of oneness. This film has stimulated divergent and severe reactions, contrary to its very objective. We are deeply saddened with the inadvertent stirring of emotions and withdraw this film keeping in mind the hurt sentiments and well being of our employees, partners and store staff.

Mini Mathur and director Kabir Khan are married for over two decades. They have a daughter named Sairah and a son Vivaan.